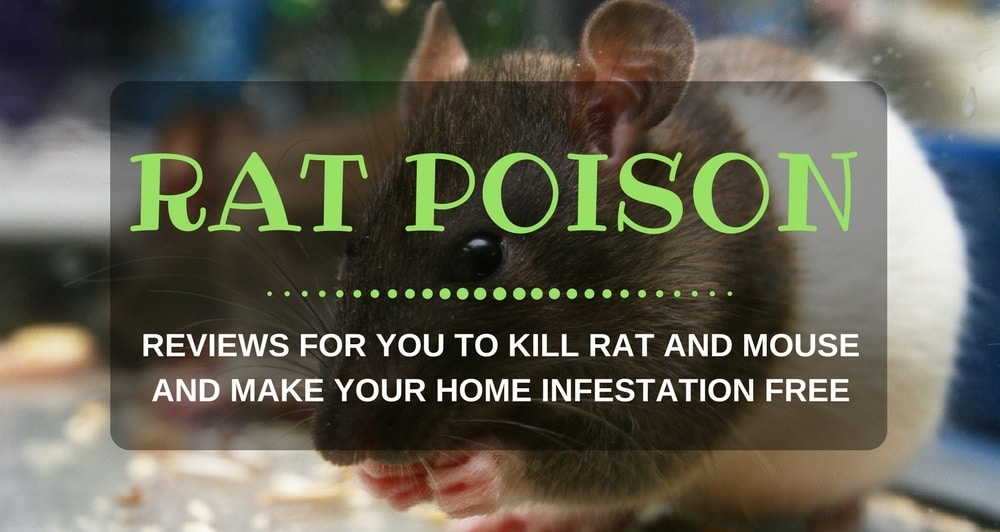 Rats are medium-sized, long-tailed rodents that are known to make either excellent pets or bothersome pests. Members of the genus Rattus are referred to as “true rats.” The most notorious to humans being the black and brown rats. While some species of rats can be tamed and domesticated, others are out causing trouble from gnawing on electrical wires to carrying and spreading deadly diseases. With the recognized health hazards associated with rats, it is important to catch the infestation and stop it before it gets out of hand. Rats have an excellent memory, making navigation easier for them

Top Rated Rat Poison to Kill Rats on The Market

When you and your family’s health and safety are on the line, it’s only natural that you take immediate action. The best rat poison products are within your reach. Here are 5 Product Reviews for You to Kill Rat and Mouse and Make Your Home Infestation Free:

One of the best rat poison products available today is Old Cobblers Farnam Bait Bar that can kill a wide-range of rats and mice even those that have developed resistance for first-generation warfarin. This is because it contains bromadiolone as an active ingredient that belongs to a group of second-generation anticoagulants referred to as “super-warfarin” designed to increase rat killer potency.

Reckitt D-Con Mice Bait Bits Ready MixAnother good mouse poison is D-Con Bait Bits that can kill mice and rats in one feeding. What makes it unique is its active ingredient called brodifacoum, which is

Tomcat All Weather Bait Chunx is a perfect rat killer and one of the best rat poison products available. Its active ingredient, diphacinone, is a first-generation anticoagulant that causes massive internal bleeding.

MOTOMCO Tomcat Mouse and Rat Bromethalin Bait Chunx comes from the same manufacturer as Tomcat All Weather Bait Chunx but with a different active ingredient. This variant contains bromethalin, which works differently from all the rat poison pellets and rat bait mentioned above. Bromethalin is a potent neurotoxin that attacks the rats’ and mice’s nervous system by stripping nerve insulation and causing lethal cerebral edema.

Last but definitely not the least, the JT Eaton Bait Block Rodenticide Anticoagulant Bait contains diphacinone as well and gets rid of rats and mice by inhibiting blood clotting leading to deadly internal hemorrhage. This is another one of the best rat poison products available today.

How Do The Best Rat Poison Products Work? The best rat poison products work depending on the active ingredient they contain. It is important for us consumers to know how these active ingredients work because they are synthetic chemicals that are potentially harmful to humans as well.

Here’s a rundown of the active ingredients contained in the products discussed above: This is a potent rodenticide that belongs to the second-generation anticoagulants known as “super-warfarin.” It can be absorbed through the digestive tract, the lungs, or the skin and is considered an extremely hazardous substance. Manifestations of bromadiolone toxicity usually show up in 2-5 days after ingestion or contact and can harm humans and animals alike. Bromadiolone reduces the action of vitamin K in the body, impairing blood clotting that may lead to fatal internal bleeding. Vitamin K1 is a known antidote for bromadiolone poisoning. Brodifacoum can cause blood to leak from its very vessels

This works similarly to bromadiolone and also falls under the “super-warfarin.” What makes it unique is its longer half-life, requiring treatment to be longer and more consistent in case of poisonings. It is a cumulative poison due to its tendency to cling to fat, which makes it very difficult to eliminate without causing deadly harm to the rest of the body. Aside from reducing blood clotting, it also makes the blood vessels more permeable, making the blood components leak even from the smallest vascular structures. This is a first-generation anticoagulant used in rodenticides early on, which is hailed less effective as compared to second-generation anticoagulants as most rodents have developed immunity to certain first-generation rat poisons. Still, diphacinone is potentially harmful to both humans and animals since it is not a skin irritant. Toxicity symptoms show up only after substantial ingestion, inhalation, or contact with diphacinone, and death tends to come slowly due to massive internal bleeding. Compared to the previously mentioned active ingredients, bromethalin works differently in a way that it attacks the nervous system instead of the blood. It works by disrupting the production of adenosine triphosphate (ATP), our body’s energy currency. With decreased ATP, intracranial pressure rises causing substantial damage to neurons, the building blocks of the central nervous system. With enough damage to the cells making up the brain and the spinal cord, paralysis and convulsions take place and may lead to death.

The Difference Between Rat And Mice

Contrary to popular belief, the terms rat and mice are not used interchangeably. Aside from significant differences in appearance, there are a lot of other things that distinguish rats and mice from one another in terms of the following: Some rats kill insects and water creatures for food Aside from damaging basically everything in your home and leaving unpleasant odors, rats and mice also pose certain health hazards when not controlled. They are known to carry dangerous diseases like leptospirosis and typhus fever. They are also hosts to other potentially harmful insects like fleas and ticks that carry their own brand of harm to both humans and animals alike.

As rats and mice are mammals, they possess the special mechanisms to develop their immunity against the drastic changes in their environment. A classic example of this is their improved resistance against the first-generation anticoagulants designed for rodenticides. This, in turn, opened the door to new developments in the pest control front by introducing the second-generation anticoagulants that are double the strength but also proven to be dangerous to humans with improper use. A new door has recently been opened in the form of neurotoxins that are also potentially harmful to humans and pets but guaranteed to control rat and mice infestation with fewer baits and maximum kill. Click here to read more about pest control.

From here on out, we can only expect the road to be paved with even more dangerous chemicals to deal with rat and mice infestations. The key is to avoid unnecessary harm by always following the manufacturer’s instructions. A little bit of rat and mice knowledge could also go a long way as it would help us understand their behavior patterns and how to get around them. If the problem goes way out of control, it’s always best to seek the assistance of extermination professionals as they’re trained to deal with the infestation. It may cost you quite a bit more as compared to purchasing the best rat poison products and do-it-yourself, but nothing should be too pricey when it comes to you and your family’s safety and overall well-being.

As for the reviews above, I personally recommend MOTOMCO Tomcat Mouse and Rat Bromethalin Bait Chunx primarily because of its different active ingredient. It takes care of the problem faster at a fairly cheap price. Just remember to always read the instructions carefully and follow them to the letter. Also, the best rat poison products aren’t meant to be left lying around within your children or pet’s reach. Always be mindful of where you store them to keep your family safe and your home pest-free.

Thank you for taking time to read this article. I hope it gave you some insight on the best rat poison to use for your rat and mice problem.