Drop Spreader Vs. Broadcast Spreader: Which Should You Buy? 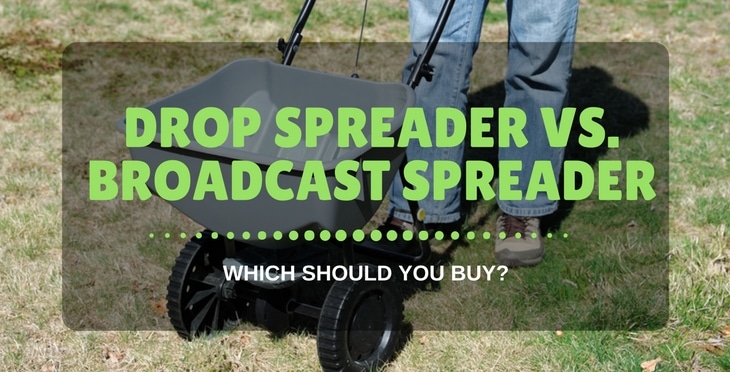 If your garden or yard is large enough, then spreading seeds or fertilizers will need a push spreader. This helps to cut down your workload and even speeds up your spreading time.

Many gardeners often find themselves having to choose between the drop and the broadcast spreader. You should know that they both do the same job but in their different ways.

This side by side review shows you the different features of each type of spreader and offers you enough information to make the right choice between the two.

A drop spreader is designed to drop seeds or fertilizer granules between its wheels. This creates a defined and more manageable distribution width.

When using a drop spreader, the seed only falls where the operator walks, so this makes the entire operation easier to understand and follow. That’s why the drop spreader is perfect for beginners.

The downside of this drop spreader’s simplicity is that the operator must overlap his path on each crossing of the lawn to make sure there is an even coverage.

Most drop spreaders feature a handle to open and regulate the size of the holes underneath the hopper for the seeds to drop. The hopper on a drop spreader is also usually smaller than the one on a broadcast spreader.

Drop spreaders are ideal for smaller lawns and gardens, especially where time is not an issue. They are also good for handling precise jobs, where there could be a sidewalk, a pool, or a flower bed near the lawn and you need to keep things under control.

A broadcast or rotary spreader features a design which makes it spread fertilizer or seeds in an arc from the front and the sides. Broadcast spreaders sacrifice precision for a wider reach.

They are faster than drop spreaders and are ideal for larger lawns or gardens. A broadcast spreader usually has a larger hopper, which is also positioned higher than the hopper of a drop spreader.

Most broadcast spreaders feature a rotating disc beneath their hopper. This spins around and any seeds or granules that fall into it gets spread out far and wide according to the spreader’s settings.

This kind of spreader is not ideal for small lawns or those with fittings like a pool, a pathway, or a bed of roses because its spreading pattern is hard to control. Drop spreaders and broadcast spreaders each have their special features and this makes them ideal for different types of jobs. Your choice between the two, therefore, will depend on exactly what you plan to do. Following is an overview of these features.

Coming to the end of this side by side review of drop and broadcast spreaders, it must be obvious by now, that no spreader is simply better than the other.

Depending on whether you have to work on a small or a large yard, and whether there is landscaping with a pool or a bed of roses, you’ll need to make your choice accordingly.