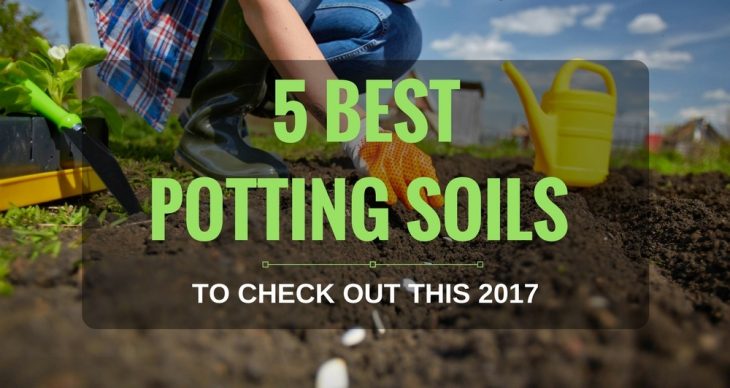 If you grow plants in pots, then you’re most likely familiar with indoor potting soil which is used for the potted plants to grow. However, one thing to take note of is that potting soil isn’t exactly soil but rather a man-made mix of composite materials such as compost heap, moss, and other ingredients. Of course, this doesn’t make potting soil any less effective than real soil. In fact, the potting soil has the potential to be as effective as real soil if you know how to use it properly.

You can make your own DIY potting soil, shop online, or get one of those potting soils Walmart stores have in the gardening department. Ocean forest potting soil is made from a unique blend of earthworm manure, fish remains, crab meal, and bat guano. It also contains compost humus, sand, and peat moss. The overall texture is known to be very light and also fluffy which makes it easy for oxygen to enter. All ingredients are organic and don’t contain any nitrogen. The Black Gold potting soil is specially made for handling flowers, vegetables, and herbs. All of its ingredients are organic such as earthworm castings and organic fertilizer, so you won’t have to worry about chemicals damaging the plants. It is also very airy and light because of the perlite and pumice. You’ll never find a better organic potting soil than Black Gold.

Espoma organic potting mix is known to be one of the best potting soils with regard to water retention. This is because it contains an enhanced water saving formula that retains the water easily. Aside from that, it is also organic and contains a lot of nutrients that promote the growth of the roots. If you don’t like frequent watering or you’re the type who sometimes forgets to water his indoor plants, this potting mix is for you.

Nature’s care organic potting soil is unique in a sense that it can expand to three times its size when you add a little bit of water which makes it great for plants. It is also made out of purely renewable and organic material and can feed plants up to two months.

What Are Ingredients of Indoor Potting Soil

Potting soil may be made from various ingredients that are good for the soil. However, the best indoor potting soil is generally made out of a mixture of six ingredients. These are, bagged potting soil, compost chicken manure, compost heap, regular garden soil, peat moss, and rock bits. Let’s go through each of these ingredients one by one:

Regular potting soil can be used alone as the base potting soil of a plant. It usually contains a lot of organic ingredients that are good for the growth of the plant. However, if you do see any synthetic fertilizers in the bagged potting soil, then you may want to avoid buying that brand as it will not be healthy for your flowers or plants in the long run. Potting soil made out of compost and dried up chicken manure

The compost heap is also a really common ingredient for indoor potting soil as it has a lot of nutrients inside the mix. In a nutshell, a compost heap is decomposed organic matter (such as wood chips or leaf mulch) that can be used for helping plants to grow properly. It can also be bought in any plant store near you. Man checking the quality of the soil

Peat moss is a substance that is able to hold water in so that it can be properly distributed to the parts of the plants. It also makes the soil acid so that it provides a good environment for the roots and the stem. A Handful of Peat Moss

Lastly, there would be rock bits which are a good alternative to the usual native soil. Rock bits are actually just rocks that have been smashed into powder-like pieces to be used for the plants. It contains a lot of minerals from rocks and is a great source of many nutrients that the rocks provide. An underground layer of rocky soil and earth

So, how do you know whether your potting soil is good or not? There are actually several criteria that you can follow to determine the best potting soil for indoor plants. We’ll go through each of them:

The best potting soils would also have the best moisture absorption and retention ability. There are kinds of soil that cannot hold water in for a long time or absorb water properly no matter how much you spray your garden hose at them. This may result in the soil drying up and the plant or flower not having enough moisture and would lead to dehydration.

Consistency refers to the structure of the soil. The potting soil has to be soft enough for the root system to stretch out and grow while being firm enough to hold the root system so that it can still stand properly or prevent it from being torn away.

Lightness would also refer to its structure. Good soil cannot be too compact; otherwise, there won’t be any space for oxygen to enter. The good quality soil has to be light and fluffy so that it has enough breathing room for air to reach the roots of the plant.

Make Your Own Potting Soil for Indoor Plants

Usually, we’re inclined to buy indoor potting soil in plant and horticulture stores because that’s the easiest and most convenient thing to do. However, buying indoor potting soil regularly will also put a dent in your wallet. If you want to save money, then you can actually just make your own potting soil at home with just a few ingredients.

How to Make Potting Soil

You can use any of the six basic ingredients mentioned above to make your potting soil. In fact, all you need are just garden soil and compost heap, and you can already make potting soil. From there, you can add the other ingredients such as peat moss, compost chicken manure, and rock bits. Other ingredients you can also add are perlite, leaf mold, rotten sawdust, pine bark, and wood chips. Pine bark mulch is said to be good in retaining nutrients, so if you can get your hands on some, this would be a good addition to your soil mix. All you have to do is mix all of these ingredients together, and you will be able to have your potting soil. With the right know-how, you can actually make the best potting soil for your plants.

What Makes a Good Potting Mix

A store-bought potting mix is the most convenient to have, and while they are usually complete, it’s always wise to check the ingredients to ensure it contains all the key elements a good potting soil must have.

Among the crucial ingredients that most gardeners look for in a potting mix are perlite, pine bark, and peat moss. Sometimes, manufacturers use vermiculite instead of perlite, but both are good at providing a rooting medium for plants. Like perlite, vermiculite is a non-organic material used as a soil additive.

You can also make your own potting soil mix if you want to. Simply refer back to the six key ingredients mentioned above or substitute any of the missing ingredients with what you have on hand.

Natural sand may be used instead of rock bits as it can help provide weight and stability to your potting medium. Just make sure it’s the construction type of sand you use to build structures though. You will need a coarser grade in your DIY mix for better drainage. Coconut coir may also be added if you cannot peat. This ingredient has an excellent capacity to retain moisture and nutrients in a soilless potting mix and can, therefore, provide food to plant roots for an extended period of time. Some store-bought potting mix like your Pro-Mix Potting Soil include coconut coir in their ingredients, and it’s excellent in both outdoor and indoor container gardening.

Indoor plants have a special need for an indoor potting soil that has a high moisture retention capacity as they rely solely on you to water them. Succulents in a pot inside your house, for instance, may not receive as much water from the rain as the plants in your backyard, and you may not remember to water them regularly. With a high-quality indoor potting mix, you don’t have to. Let your indoor plant get everything it needs from what you put in the pot. A picture of ingredients, materials, and equipment that can be used to make potting soil

As compared to using normal soil, using potting soil does offer a lot of advantages. Here are a few of them:

When wanting to choose the best soil for your garden, it is very important to compare and contrast a few brands so that you can tell which of the choices are the best for your own garden. In the above review, five choices were given. By comparing the pros and cons of the five, we can weigh which ones give the most advantages and benefits as compared to disadvantages. Out of the five, the most likely best choice would be theFoxFarm FX14000 1-1/2-Cubic Feet Ocean Forest Potting Soil. This is because this particular brand satisfies the criteria of how to choose indoor potting soil (these criteria were given a while ago).

Did you learn a lot from the article? If you liked it, share it with your friends. Thank you for reading!