How To Get Rid Of June Bugs: 4 Natural Ways To Save Your Garden From June Bug Infestation 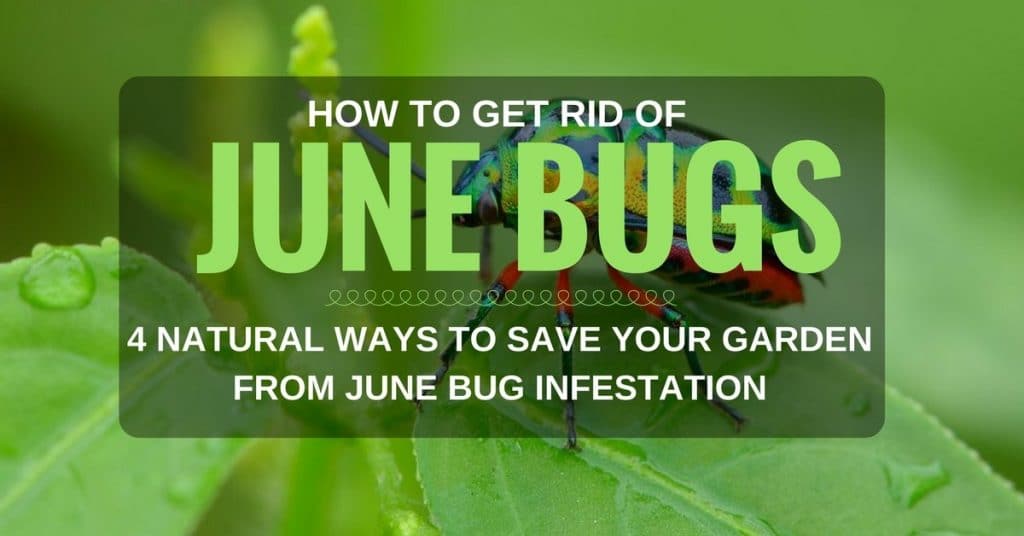 June bugs are one of the biggest foes of many gardeners. These bugs often come on the eve of the summer season. They often feed on landscape plants which can cause severe damage in your garden. However, you don’t have to panic when these bugs arrive. In this article, we are going to talk about how to get rid of June bugs without using chemical pesticide.

What Are June Bugs?

June bugs are also known as scarab beetles. These beetles have different kinds of species. They are called June bugs because of its timely appearance around the end of the spring season. June beetles share the same physical appearance like most bugs. They have an oval back and sharp front pincers. Aside from landscape plants, these grubs also feed on turf and lawn grasses. You can easily tell if your garden is June bug infested. Their damage is often depicted as large brown areas in your garden, and the grass can be easily uprooted.

These groups of scarab beetles have 206 individual species. They are often called as May beetles or May bugs. These bugs have a dark reddish brown color. They are a little pudgy and measure around 1 inch to 1 1/3 inches long. You can easily distinguish them by looking at their distinctive markings. This beetle is one of the 206 species of Phyllophaga

Green beetles are often found in the areas from Maine to Georgia. They measure up to an inch long. You can easily distinguish them by their green color. There are no special markings seen on this type of bugs except its color. A green June beetle crawls on top of an ornamental plant

This beetle looks like a tiny watermelon because of its green and white marking. It stands around 1 ¼ inches long. This scarab beetle often makes a hissing sound when you touch it. It is often found in the west of the Rockies. It is also considered as an agricultural pest because it feeds on crops and ornamental plants. The Japanese beetle is also considered as an agricultural pest, and just like the ten-lined June bug, it feeds on both crops and ornamental plants. It particularly feeds on strawberries, tomatoes, raspberries, corns, and roses. This invasive beetle has a brown and green metallic sheen and measures about ½ to 1 inch long. This type of bugs is active during the daytime.

This Japanese beetle is infesting on a wild grape leaf

This type of beetle is often found all over the temperate areas in North America. This invasive beetle has a caramel brown color and measures up to ½ to 1 inch long.

The first thing that you should do is keep your lawn healthy. It is best that you invest in an irrigation system with a good drainage system.

2. Keep Your Grass A Little Longer During The Summer Season

June bugs often lay their eggs on short grass. It is imperative that you mow your grass into higher lengths during the summer season.

This scarab beetle is commonly seen in the Southwestern part of the US. It stands about 1 to 1 ¼ inches long. You can easily recognize this beetle because of its metallic green color.

Another efficient way on how to get rid of June bugs is Bacillus thuringiensis and beneficial nematodes.

Bacillus thuringiensis (BT) are soil-dwelling bacteria that are often used as biological pesticides. They often occur naturally from butterflies and moths. They are also found in leaf surfaces, animal feces, aquatic environment, flour mills, and other grain storage facilities.

Another way on how to get rid of June bugs in your garden is by luring both the bugs and animals into your garden. Small animals like frogs, snakes, toads, and birds often feed on June bugs. You can easily lure bugs into your garden by having a small pond or a good water irrigation system. Frogs and toads can easily be drawn by water. However, make sure you can control these animals afterward. How To Trap June Bugs

June beetles are easily attracted to sunlight. Once they see the incandescent light, they will swarm over the light and eventually fall into the jar of oil.

June bug infestations can cause significant damage in your garden. It is very important that you take actions immediately when you notice the signs of damages in your garden. If you don’t take measures immediately, the infestation can spread all over your garden. These are just some of the natural methods that you can use to get rid of them. However, if things would escalate further, it is best that you call an expert to help you choose the best chemical pesticide for your problem.

Thank you for reading this article. If you have some experiences on how to get rid of them, feel free to share them in the comment section below!