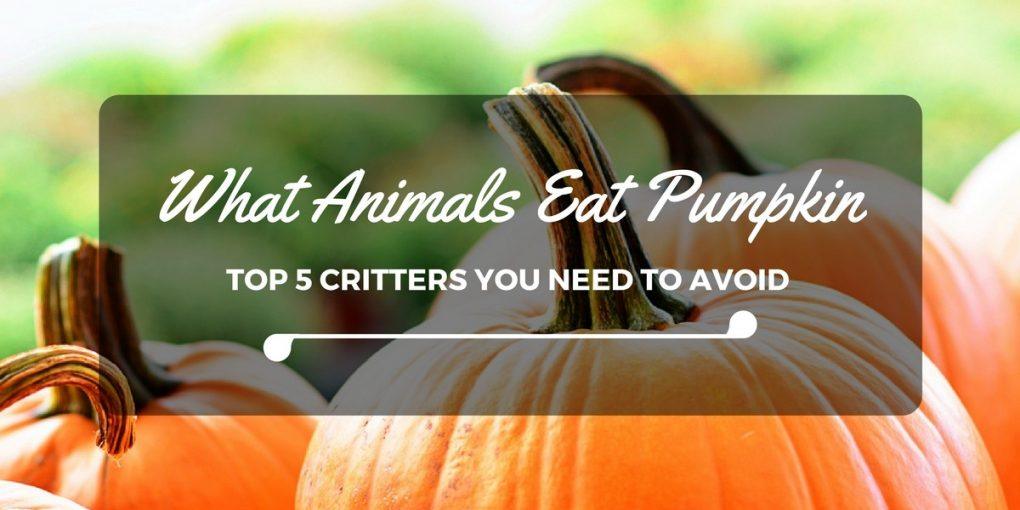 What Animals Eat Pumpkin: Top 5 Critters You Need To Avoid

"What animals eat pumpkins?" is quite a popular question asked by many. After all, pumpkins are a very much widely used vegetable around the globe, and people would surely want to know what pests to avoid.

There are indeed a lot of people who had been starting their lawn and patches in their farms, backyards, and gardens.

By just planting some pumpkin seeds during the last week of May and by the time October comes, pumpkins would pop out and make everyone’s garden brightly lit with a vibrant orange color. Aside from being a vegetable that is easy to plant, pumpkins are also quite versatile. Not only does it offer a rich flesh, but a pumpkin’s flowers and seeds can be eaten as well.

Also, because Thanksgiving and Halloween is a thing in some countries, pumpkins go hand in hand with these holidays whenever fall comes along.

People are certainly not the only ones who are aiming to get a nibble out of a pumpkin’s sweet flesh. During the harvest time, an individual who owns a huge lot of pumpkin patches must expect the worst.

Always bear in mind that those juicy pieces of vegetables will attract several critters to have their fair share of pumpkin feast.

Do you want to know what animals eat pumpkins? Here are the top 5 critters that you need to avoid:
1. Deer
2. Rabbits
3. Moles And Mice
4. Chipmunks And Squirrels
5. Woodchuck What animals eat pumpkins you ask? Be wary of a roaming deer because this critter is not only around during the fall season, but their kind is also lurking during summertime wherein your pumpkin’s luscious vines dangle scrumptiously in the wind. Who could resist such a tempting treat? A deer can’t, and they won’t care if your patches go bald before the harvest season.

You think that they would go away after they eat a hefty clump of vines, but just when your vines start to grow back again, they will come back even hungrier than before.

The cycle never ends! When you indeed manage to nurse your pumpkin patch and bear some vegetables, a deer will still feast on your produce, especially when the vegetables are ripe and when the food goes scarce during the start of the first snow. Would you still want to know what animals eat pumpkins? Well, here is how you’ll find out. During night time, just when you hear some scratching sounds, peek over the window and gaze at your patch.

If you’ll see a rabbit munching happily on your vines, you get your answer. Rabbits would love to munch on vines anytime of the day. They also feed on young pumpkins, so chances of harvesting one will be bleak if you allow them to devour your lot. What animals eat pumpkins that is tiny enough for you to not notice right away? These animals are the mischievous moles and mice. If you are not convinced that they indeed exist, be aware that their style of eating pumpkin is quite sneaky.

These pests don’t go wandering above ground; instead, they burrow under the soil. Once they’re successful in hiding underground, they’ll start eating their way up under a ripe pumpkin until they reach the center to eat the seeds as well. What animals eat pumpkins that is cute yet pesky when left unattended? Sure, chipmunks and squirrels are endearing, but it’s not always the case. Like mice and moles, these pesky pumpkin eaters will gnaw onto your vegetable until they reach the sweet zone of seeds. What animals eat pumpkins that is so persistent in getting a bite? Like any other pests that devour ripe pumpkins, woodchucks are notoriously known as an animal that knows no limits.

Even if you wrap your patch with a secured line of wires, a woodchuck will ignore this and would simply burrow under the wires and pass unscathed.

Also, don’t underestimate this little punk because they do know how to climb over fences, and gnaw on it even if it’s made of metal. A person asking “what animals eat pumpkins?” is not to be blamed. After all, who wouldn’t want to have a really good harvest?

We all do, and thus, we need to know how to avoid attracting these animals. To reduce the number of critters grazing onto your lovely patch, you can actually hunt down these pests.

As long as your place legalizes these actions, then you are good to go. You can also use traps and fences to create a boundary. And as for the animals that go under the fence, using spray repellants will do.

However, this must be done regularly, especially after a rainfall. Lastly, if you are not that fond of repellants, you can get a field cat to do the catching. After knowing all of these, I expect that you will never have to wonder about what animals eat pumpkins!

Thank you for reading this article, and I hope you have learned a lot from this content. If you know other animals that eat pumpkins, share them below!