How Long A Chestnut Tree Can Live and Other Info 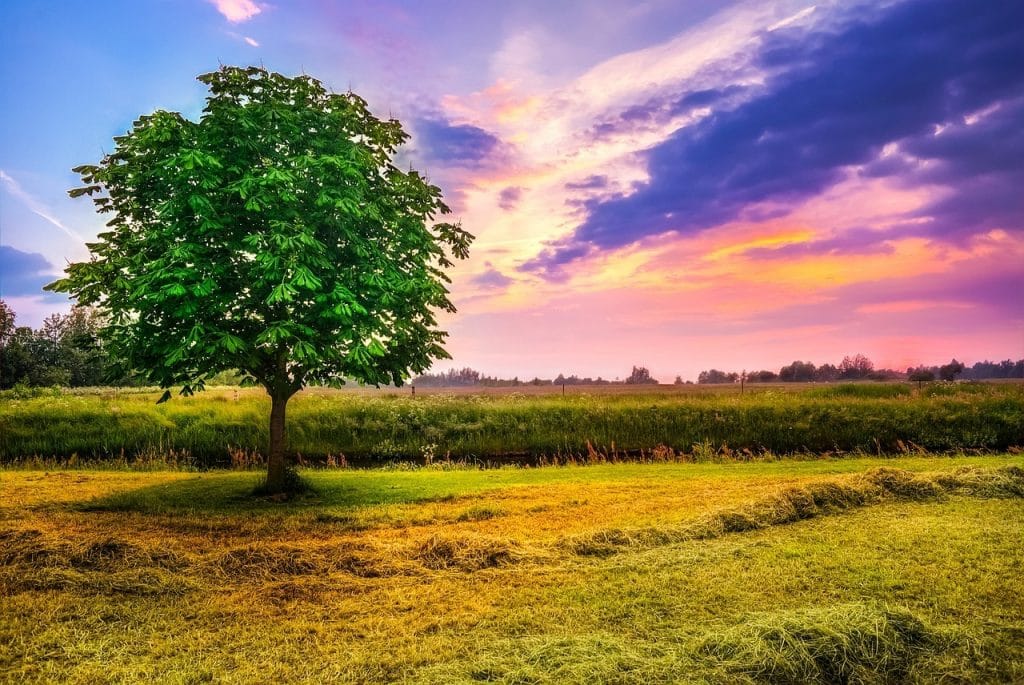 There are eight different types of chestnut tree. They are closely related to oak and beech trees and native to the northern hemisphere, where they thrive in temperate climates. The major groupings of chestnut tree are named for their native region: American, Chinese, European, and Japanese. Two chestnut tree varieties are native to the U.S.: The American chestnut tree, which thrives in the eastern states, and the Dwarf chestnut tree, which thrives in the southern and eastern states. If you really want to impress your friends with knowledge of all things chestnut, keep reading. We packed all the facts into this single article.

How Long Does A Chestnut Tree Live?

A typical chestnut tree lives between 200 and 800 years, but some European trees pass the 1,000-year mark. Though the trees live long lives, their chestnut production usually peaks when they are around 40 years old. The tree’s wood is prized for its weather and rot resistance, as well as its softer, easy-to-work nature. It is versatile enough to be used in everything from cabinetry to telephone poles. The tree’s wood and bark also produce a tannic acid that is exceptional for tanning leather. It’s so useful in leatherworking, in fact, that the economic histories of chestnut tree lumber companies and leather companies are closely linked.

Horticultural archeologists say the earliest evidence of agricultural use of chestnut trees appears in ancient Persia (modern-day Iraq/Iran). The Romans introduced it to Europe. Monasteries preserved and nurtured groves of the trees during the Middle Ages. When Europeans arrived in the Americas, they recorded finding vast stands of the trees ranging from what is now Maine into Florida. 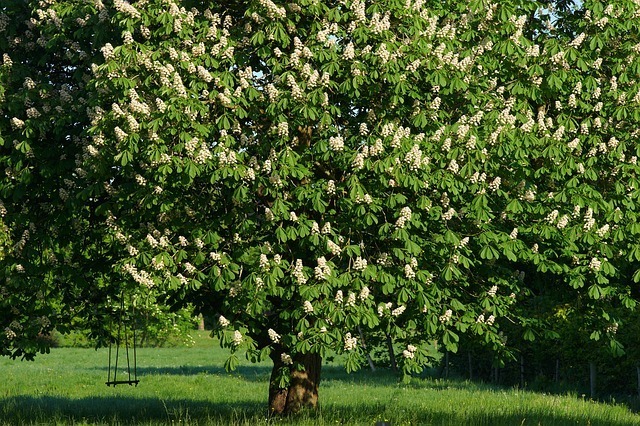 With the ancient Roman impetus to plant chestnut trees, they became as much a part of modern Italian and Sicilian cultures as olive trees. Sicily lays claim to the largest and oldest living chestnut tree. It is located in Sant’Alifio and is estimated to be up to 4,000 years old. When measured in the late 1700s, its trunk was 190 ft. around. However, that single trunk began separating into several smaller trunks, so it looks like several trees today. Underground, they all share the same roots.

The island country of Corsica (just west of Italy) is dense with chestnut trees because its ruling governor in the late 1500s ordered all landowners to plant four trees yearly, including a chestnut tree. (The others were olive, fig, and mulberry.) Chestnuts thrived in the island’s climate and soil and remain an important economic staple. Corsica is also considered the birthplace of chestnut beer. More on that in a bit.

The chestnut tree was a major contributor to the nutrition and livelihood of eastern Native Americans, and European colonists followed suit. But in the early 1900s, chestnut blight decimated the population of American chestnut trees. It is thought the disease originated from trees imported from Asia. It killed more than a billion American chestnut trees. Preservationists and geneticists are still trying to revive the species.

Planting A Chestnut Tree For The Next Generation

In the modern world, nearly every chestnut tree you see was human-cultivated. However, people rarely plant chestnut trees for themselves. This is because it takes at least 15 years for a tree to bear nuts and another 35 years for the tree to produce an optimal number of nuts. Someone planting a chestnut tree is really doing so for the next generation.The American Chestnut Foundation is dedicated to restoring American chestnut trees to the eastern U.S. forests. They are based in Virginia and have an impressive network of state chapters and volunteers helping plant and protect American chestnut trees. Their members work with seedlings that are grown to be blight-resistant. The organization’s work is looked at as a template for restoring other tree species and plants.

When chestnuts grow on the trees in early fall, they are housed inside a prickly green husk. The nut is an excellent nutritional source. It is rich in complex sugars, vitamin C (chestnut is the only nut to provide it), and potassium. The nuts also contain zinc, iron, magnesium, sodium, and calcium. They are a minor source of protein and low in fat. They were so well regarded as an energy source that ancient Roman soldiers were given a meal of chestnut porridge before battle.The most common way to consume chestnuts is roasted. There is a long history of street vendors offering roasted chestnuts, dating back to 1600s Rome and continuing into modern-day Europe. Hot roasted nuts are a popular winter treat and are often sold from street-side roasting carts and served in paper cones. Though the nuts are easy to roast in a frying pan, cooks must be careful to cut an X on each chestnut’s flat side to release steam and prevent an explosion.This winter tradition of roasting chestnuts is also immortalized in the 1945 Nat King Cole holiday hit “The Christmas Song,” which is better known by its subtitle/opening lyric, “Chestnuts roasting on an open fire.”

There’s More To The Chestnut Than Roasting

Though roasted is the most common way to consume the chestnut tree fruit, it is far from the only way. Clever chefs have turned the nuts into everything from candies to baking flour to beer. We gathered some of our favorites for a quick tour.

Drying chestnuts intensifies its caloric value, doubling the calories per gram. A gram of dried chestnuts contains nearly 400 calories. Dried chestnuts are typically ground into flour. Though the resulting flour resists rising like traditional wheat flour, it is gluten-free and can be used in baking products including bread and cakes.

Bakers employ chestnut flour in making pastries and cakes. The well-known Italian Castagnaccio cake is made from chestnut flour. Other primary ingredients include pine nuts, raisins, and olive oil. This dense cake is traditionally served with honey, ricotta, and sweeter wines.Mont Blanc is another chestnut-based dessert, common in France, Italy, and Japan. It appears in a 1475 cookbook and the modern recipe is the same: sweetened pureed chestnuts crowned with whipped cream. The name (literally “white mountain”) refers to the dessert’s resemblance to a snow-covered mountain.

Modern-day awareness of gluten intolerance has spurred a banking industry centered around chestnut flour. It is particularly popular for items including cakes, torts, English-style puddings, and cheesecakes. There is also a debate about whether bread made with chestnut flour is truly bread. Purists say no, as they only consider it bread if it is made from wheat flour. Additionally, chestnut flour’s inability to rise like traditional wheat flour leaves chestnut “bread” much denser than its brethren. However, many of those who have to quit gluten swear by chestnut flour bread as a worthwhile substitute. 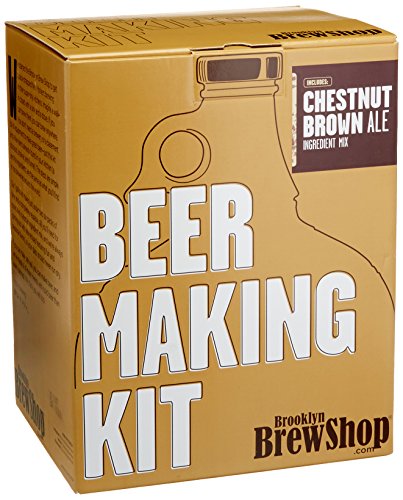 Starch is the key element in grains used to brew beer. It is what gets converted to everything great in beer: suds and alcohol. The chestnut’s starch content rival that of many brewing grains, particularly malted barley. Chestnut beer is popular in France, Brazil, and, most recently, the U.S. microbrewing community. Beer aficionados describe chestnut beers as having a slightly thick, silky texture, with nuances of roasted and smoky flavors. Bonus: many chestnut beers are gluten-free, so your gluten-intolerant friends can enjoy a pint with you. (Be sure to read the label to make sure.)

Like many things chestnut, the beer tends to appear in the fall, as that’s when chestnuts become available. Italy and Corsica are particularly adept at brewing with chestnuts. The beer is known as birra alle castagne, but there are numerous variations on brewing with chestnuts. Many variations use chestnuts in place of traditional grain. However, there are styles using smoked chestnuts, dried chestnuts, and even incorporating honey produced by bees that only collect chestnut pollen. Thank goodness for the chestnut beer flight!

In Summary: More Chestnuts Than You Expected

You may have come here looking to find out how long a chestnut tree lives, but you ended up taking an introductory course on the topic. As with many agricultural products that we take for granted, chestnuts and the chestnut tree play more of a role in our history, nutritional life, and modern culture than we realize. Taking a quick deep-dive like this article barely scratches the surface, but it can help us gain insight that brings more meaning to our next encounter. Whether you happen across a roasted chestnut street vendor this holiday season for those chestnuts on the open fire, seek out gluten-free bakery treats, or want to try a new spin on the microbrew that’s safe for everyone, may chestnuts be a delightful and reflective part of your future. If nothing else, you are going to be full of enough facts to wow your friends with chestnut lore. Maybe you can convince them to help you plant a few disease-resistant seedlings to ensure there are chestnuts for future generations.