Growing Your Own Catnip Plant 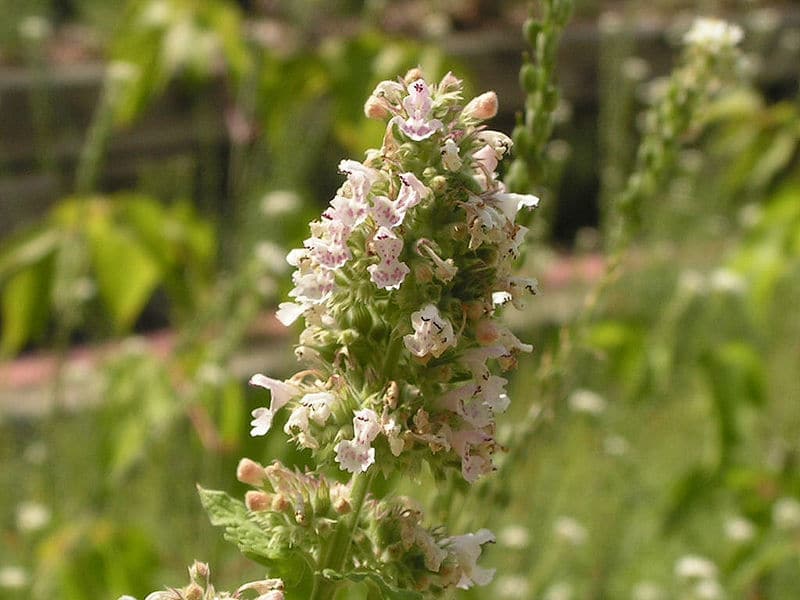 A catnip plant is a perennial herb that is also known as catswort and catmint, because it’s a member of the mint family. Its notched triangular leaves and small flowers give this plant a distinctive appearance.

The plant usually lasts for two years. Catnip is native to the Middle East, central Asia, and parts of China and Europe. Due partly to its popularity, catnip now grows all across North America. It thrives in many places and is often found on roadsides, along field edges, and along streams.

​While some people plant catnip for its stimulating effect on cats, others grow it to attract butterflies, which in turn aid in the pollination process. It is the plant’s scent that is attractive to butterflies, as well as bees. It is not, however, as appealing to people. Its smell has been described by some as a combination of oregano and thyme, and by others as somewhat skunky. Interestingly, rats and mice are repelled by the catnip plant.

The catnip plant is a versatile herb that can be grown from seeds or from plants, indoors or outdoors, and in containers or in the ground. Catnip is usually planted in the spring after the last predicted frost. However, some gardeners prefer to plant the herb earlier in the year in indoor containers and then transplant them outside after the last frost.

Catnip is a particularly hardy plant that is easy to grow. For this reason, gardeners who plant this herb are advised to make sure it doesn’t take over all of its neighboring plants. One way to do this is to plant a five-gallon bucket in the garden up to the rim. Fill the bucket with a rich loam and plant the catnip seed.

​This herb blooms during the spring, summer, and fall, with small flowers that come in shades of white, blue, pink, and lavender. It is supported by a square-shaped stem and can grow up to 5 feet tall.

​How To Care for the Plant

For best results, bury your catnip seeds one-eighth of an inch below the soil surface, and space the seeds at least 15 inches apart from one another. Cover young plants with wire netting if they are exposed to curious cats and other animals.

The catnip plant prefers a rich soil that drains well and full sun; however, this herb can also thrive in partial shade. Though catnip needs a moderate water supply, it tolerates drought after it has become established. In fact, catnip grown in soil that is too wet can suffer from crown rot.

Catnip can also thrive in hydroponics, a technique of growing plants in a nutrient-rich liquid solution rather than soil. As a matter of fact, the aroma of the catnip plant is stronger when grown by the hydroponics method and when grown in a sandy soil.

​​​​​Catnip that is grown indoors thrives under fluorescent lighting or plant-growing lights. It is best to soak the plant thoroughly only after the soil has become almost dry. You will grow a stronger indoor plant if you use an oscillating fan at least two hours a day.

​You can expect your catnip seeds to sprout within 10 days in warmer soil, 20 days in colder soil. Once your catnip plants reach about 5 inches in height, thin them so they grow 18 inches apart.

​When and How To Harvest

It is acceptable to cut back your catnip in the early summer. This is the best time of year to harvest the stems. Pinch off any damaged tips of the stems to let the catnip plant grow more healthy foliage. In general, you may start harvesting your catnip 12 to 15 weeks after you sow it. If you cut your catnip completely down after the first bloom, you will allow the plant to regrow and bloom again.

​To dry your catnip, you may use a dehydrator or simply hang the stems in small bunches in a spot that is warm and airy. Once dried, catnip should be stored in an airtight container in a cool, dry place.

​Using Your Catnip With Cats

Cat owners give a variety of reasons for introducing their felines to catnip. Some do it to help shy cats learn to play, while others spray it on toys to get their pets to use them. Catnip can also be used on scratching posts to encourage cats to use them.

Catnip is primarily used to give cats a sense of euphoria, or complete happiness. The leaves and stems of the catnip plant contain nepetalactone, an oil that, when inhaled by a cat, causes a chemical reaction that basically intoxicates cats. However, when eaten, catnip acts as a sedative.

​In fact, catnip is sometimes used to lower the stress levels of homeless cats in animal shelters, feline patients in veterinary clinics, and cats living in foster homes.

A cat rubbing against catnip or chewing the herb causes it to release more nepetalactone. After smelling this oil, cats typically roll around flip over, meow, growl, purr, and become generally hyperactive. These behaviors can also be seen in large cats, such as leopards, pumas, and jaguars.

Catnip can be delivered to cats in the form of scratching pads and toys, sprays, pellets, and loose leaves. For human consumption, catnip can be found in capsule form.

​Interestingly, only 50 to 75 percent of cats are affected by catnip. Kittens are not susceptible to catnip until they are several months old, while many senior cats lose interest in the herb altogether. Some cats are susceptible to the scent of one catnip brand over others.

Most cats will play with the herb for about 10 minutes before experiencing olfactory fatigue and losing interest. Olfactory fatigue, or nose blindness, is a normal and temporary condition in which an individual loses the ability to identify a particular smell after prolonged exposure to it. It usually takes less than two hours for cats to become susceptible to the stimulating effects of catnip again.

​Catnip is generally considered safe for cats. Cats are unlikely to overdose on catnip, but if a cat ingests a lot of the herb, it may vomit and experience diarrhea. These symptoms will eventually wear off. However, it is recommended that cats who display these symptoms not be exposed to catnip again. Some people recommend that cats should only be exposed to catnip twice a month to prevent dependence.

​Identifying Other Uses of Catnip Plant

Despite its name, catnip is not just for cats. As a member of the mint family, catnip has a minty flavor and can spice up salads, cooked foods, and fruity wines. The catnip plant has also been candied and used as a dessert. The herb’s flavor is not the only benefit humans can derive from catnip. It contains essential minerals and vitamins, as well as organic compounds that support healthy lifestyles.

Some people add catnip to chamomile, mint, or lemon balm, because the herb helps them relax and manage stress. Catnip has also been used to reduce nervousness and promote recuperative sleep in many animals.

​Another great quality of catnip is its ability to repel mosquitos, cockroaches, black flies, termites, deer ticks, stable flies, and other insects. You simply rub a handful of leaves from the catnip plant onto your skin to protect yourself from bugs.

Some people add dried catnip leaves to potpourris. Combined with other aromatic herbs, catnip provides a scent that is widely considered pleasant.

The catnip plant’s ability to repel insects has been documented. Less proven are the herb’s medicinal qualities. Among the ailments that have been treated with plant’s dried leaves and flowering tops are the following:

In addition, teas that contain catnip leaves can act as a sedative in humans. They can also help treat insomnia, nausea, and toothaches. Some people who have used catnip as a medicine have experienced headaches and general weakness.

Though catnip is widely known as a stimulant for felines, it can also affect canines. The herb intoxicates cats and causes a short-lived high in them, but it has a very different effect on dogs. When ingested by a dog, catnip can act as a sedative. Some people recommend sprinkling fresh catnip leaves in a dog’s water dish or adding a very small amount to a dog’s food. This can be done to alleviate stress, to treat insomnia, and to alleviate motion sickness in dogs.

Catnip has also been used in dogs to promote urinary health, to reduce cramps and diarrhea, to ease menstrual cramps, and to help treat cuts and scratches.

​Some gardeners grow catnip solely for its pleasant appearance. For example, one variety of the herb grows up to just 1 foot in height and spreads easily, which makes it ideal as a ground cover.

Making the Most of a Catnip Plant

​Due partly to its name, the catnip plant is often regarded as an herb grown just for feline friends. As evidenced by the above information, catnip has a wide variety of applications for cats, dogs, and humans.