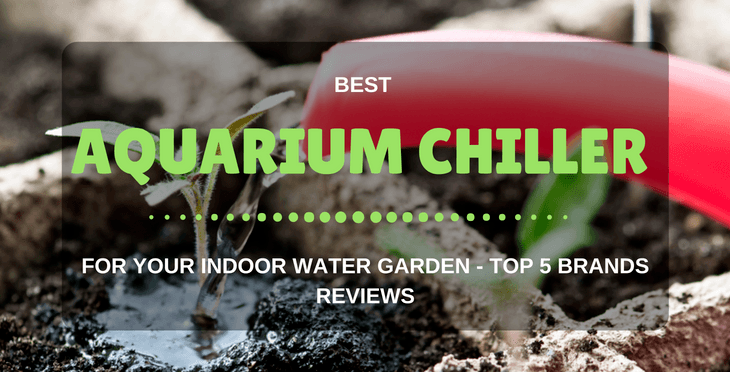 An aquarium chiller is actually one of the most important pieces of equipment for a gardener who’s growing an aquaponics and hydroponics garden. While most beginners may dismiss this piece of equipment as just an optional device, it’s actually crucial in the growth of the plants because lower temperatures allow plants to grow in water to get more oxygen. This is why you have to make sure that you buy the best aquarium chiller for your garden.

Get To Know Our Top Pick For The Best Aquarium Cooler Right Here!

So that you won’t have to scroll down to see the top choice, we’ll provide it right here already. Our top choice for the best aquarium chiller is the Active Aqua 1/10 hp Water Chiller. Coming from one of the most well-known chiller companies, Active Aqua is one of the most popular chillers for hydroponics and aquaponics. Known for its easy-to-use microcomputer control system and its environment-friendly setup, this is the perfect chiller for you to use in your indoor water garden. Other than that, it’s also compact, so it’s easy for you to set up anywhere.

A Comparison Table Of The 5 Best Aquarium Chillers

The Benefits Of Aquarium Water Chiller

Let’s further understand what having a higher dissolved oxygen level means for a hydroponic plant. It’s important to note that the roots need oxygen and nutrients in order to grow. If the plant lives in a hot or warm environment (if the water becomes heated), there won’t be enough oxygen present for the plant. So, in order for the plant to have enough dissolved oxygen, the roots have to be exposed to a cold environment, hence the small aquarium chiller is needed. Another benefit that plants will get from a chiller is that the water won’t be exposed to any dangerous components or pathogens. Pathogens and other similar dangerous substances often thrive in a moist and warm environment. If the water where the hydroponic plant is growing isn’t cool or cold, then the pathogens can multiply and grow faster. In a chilled environment, however, these dangerous pathogens would eventually just die out without multiplying in number.

One of the best things about a chiller is that it can be a substitute for a heatsink in a grow room. It absorbs the heat from the entire grow room, making the entire room cool. Also, if your aquaponic and hydroponic grow rooms have a chiller, then you won’t have to install an air conditioning unit. You can also lessen the number of electric fans you have inside because the chillers can do their jobs.

One of the most interesting things about aquarium chiller is that they’re pretty versatile. This means that they can be used for other purposes aside from just hydroponics. It can be used in place of water fans, carbon emitters, and some air conditioning units.

In fact, it can be used for fish tanks as well. If you’re wondering why you need a marine aquarium chiller for your aquarium, it’s simply because most fish won’t be able to survive in heated water which is why it’s really important to keep your aquarium water cool so that they can survive.

Here are a few FAQs that can help you understand water chillers much better:

1. How Does An Aquatic Chiller Work?

When you buy your first aquatic chiller, the first thing you’d probably ask yourself is how does it work? In fact, you’ll probably think that it has the ability to create cold air so that the water will become cold. However, they don’t work on the concept of creating cold air, but rather on removing the heat. The mechanism of the machine works the same as the cooler of a fridge or an air conditioning. Basically, the machine absorbs the heat inside the water and brings the heat to the radiator to decrease pressure. A cooling fan is then used to fully dissipate the heat.

2. How To Install An Aquatic Cooler?

Installing an aquatic cooler is actually easier than most people think. All you really have to do is connect the chiller to the plant. It’s pretty DIY and doesn’t need much plumbing. Chillers already come with a filtration system and a pump, so everything is pretty much build in place.

Of course, if you buy a chiller that needs an external pump, you have to buy one to fit it. If you’re looking for a good pump, here’s a list of some of the best air pumps for hydroponics (Click Here).

Probably one of the more important things to consider is where to place the cooler. Because the chiller dispels heat when it is on, the chiller needs to be in an open space. Other than that, the chiller has to be set up in a cool area so that it won’t overheat itself. It is recommended that the temperature be around 20 degrees colder than the hot air coming from the chiller.

3. How To Choose The Best Aquarium Chiller?

Since most aquarium chillers are pretty much built the same, you won’t have a problem with features. You just have to make sure you know the technical details of the product you want to get. First, you have to consider the flow rate of the chiller. Since your chiller will be regulating water through the machine, you have to get one with a strong flow rate so that the regulation is consistent.

However, you also have to make sure the flow rate matches the pressure of the water tank. For example, if your chiller needs to have a pressure of 3 gallons per minute, then it will need to have a flow rate of 120 gph. This is an aquarium chiller that is built mainly for hydroponics. It has an aquarium temperature control device that you can control with a touch pad LCD. It is also made of titanium, which makes it resistant to corrosion and also effective for heat exchange. Most of all, it’s extremely easy to use— easier than most other chillers. Without the need for any plumbing and installing, all you have to do is plug the machine in and connect it to your aquarium. After that, you can just use it right away.

The IceProbe chiller is one of the most popular probe chillers because of its power and structure. It has axolotls that require the water not to go over 75 degrees Fahrenheit and can handle a tank that reaches up to 10 gallons. What’s really great about this unit is that it doesn’t need a water pump inside. Plus considering its cooling power and other great features, it’s a rather cheap aquarium chiller for its price.

The Hamilton Euromax is known not just for its power but for its unique features as well. First off, it has a built-in memory system, allowing you to configure the settings just once. The memory can retain the settings even after you turn the machine off. It also has a Dupont ozone refrigerant instead of a Freon and has a special Anti-freeze system.

What makes this water chiller amazing is its placement of condenser. The condenser is placed in front of the machine so that it pushes the warm out through the back. This totally dispels the heat from the machine, thus preventing overheating. It also has a very detailed thermostat controller with a bright LCD screen to control it. You can also get this model in 1/15 hp power, making JBJ one of the best nano aquarium chiller brands you can find.

This water chiller is a very easy-to-use brand that’s probably the most economical. It does not need any setting up and has a reusable air filter that has an easy-cleaning feature. It is also able to take aquariums that are up to 55 gallons. The most common complaint of the users is that the service repair and replacement parts of the unit are hard to find, even at Coralife.

As we mentioned above, our top pick for the best aquarium chiller brand is the Active Aqua 1/10 hp Water Chiller. Our choice is based on the number of amazing features that it possesses that are geared toward aquaponic and hydroponic planting. Here are some of the noteworthy features:

This is probably one of the most intelligent chillers you can find in the market with a microcomputer control system, enabling you to set the settings to exactly how you want them. This way, you can control the power and temperature levels. It also has an LCD display, which shows you how you can change the settings.

This is probably one of the most noteworthy features of the product. Unlike most chillers, this one doesn’t use a freon because freons are not very efficient, and they are not environment-friendly. Instead, the Active Aqua uses an R134a Refrigerant that is very much well-loved by Green advocate users and is also perfect for maintaining the temperature of the water.

You’ll also love the refrigeration scope of this machine. It can take up to 26 gallons/100 to even 80 gallons/100. It is because of the huge scope that it is widely popular among gardeners with big indoor water gardens.

You’ll also love how durable this little machine is. Since its evaporator and body is made of solid titanium, it is resistant to corrosion and even rust. It’s also really sturdy and is quite resistant to impact.

Ready To Buy Your Aquarium Chiller? Get Our Top Pick Now!

An aquarium chiller is a must-have tool when raising an indoor water garden such as aquaponics and hydroponics. Since your garden is located indoors, you have to consider the factors that can affect the growth of your plants like the level of temperature in the water.

We hope that we were able to answer all your questions about the best value aquarium chiller and give you an idea as to which chiller is the best one you can get.

Still need some help with other equipment? You can check out our review about the best pH meters for hydroponics here.